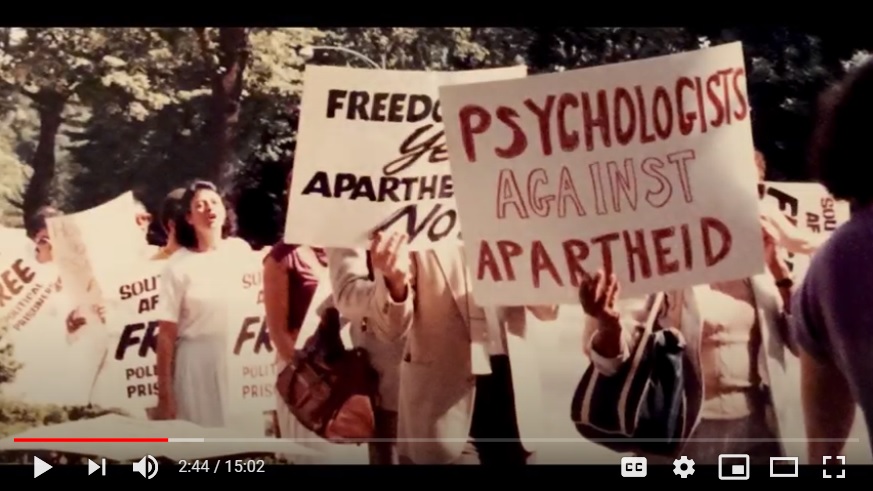 On a sunny August afternoon in the summer of 1986, more than 50 psychologists gathered in downtown Washington, DC to protest apartheid outside the South African Embassy. In this short film celebrating SPSSI’s 85th anniversary, learn about some of the scholar-activists who spearheaded SPSSI’s grassroots anti-apartheid work, how their journey to South Africa brought new understanding to their roles as scholar-activists within the psychology community, and how SPSSI's anti-apartheid work dovetailed with its undertaking to be recognized as an NGO with consultative status at the United Nations.

"Celebrating 85 Years of SPSSI" premiered on August 5, 2021 at SPSSI's Virtual Conference. Click here to download a video of the 30-minute session that includes the 15-minute short film and the 15-minute Q&A session with SPSSI President Dr. Keon West and Past SPSSI Presidents Drs. James Jones and Michele Wittig, who were featured in the film.

SPSSI leaders featured in the film:

Thank you to SPSSI President Dr. Keon West and SPSSI Executive Director Anila Balkissoon for producing the film, SPSSI Policy Director Sarah Mancoll for researching and writing for the film, and Cait Ferranto of West Eleventh Media for serving as Editor and Producer.

Want to learn more about SPSSI's anti-apartheid and UN work?