On this holiday and national day of service, SPSSI wanted to look back at the legacy of Dr. Martin Luther King, Jr. and recognize some of the special ways he shaped SPSSI as an organization and psychology as a field of study. 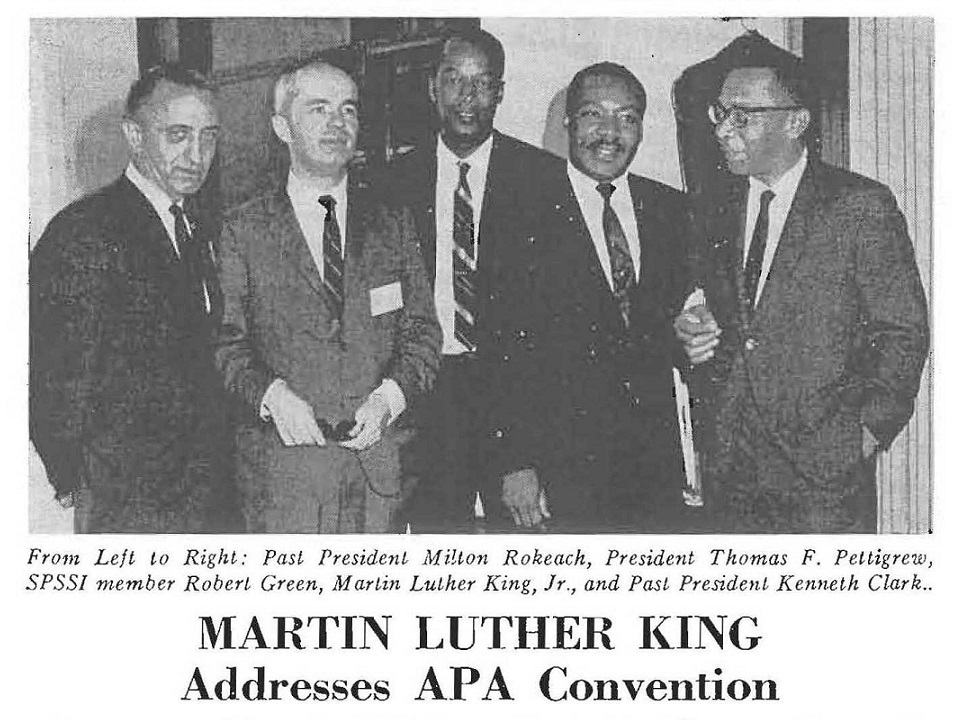 As described on SPSSI's interactive timeline, in 1967, SPSSI’s incoming president Thomas Pettigrew invited Martin Luther King, Jr. to speak as part of SPSSI’s program at the APA Annual Convention in Washington, DC. His topic: "The Role of the Behavioral Scientist in the Civil Rights movement."

As Pettigrew later recalled: "APA gave us a small room in the Washington Hilton. They gave us this little room, and we objected. They said, ‘Well, hardly anybody’s going to come’; and we said, ‘We think you’re wrong about that.’” Pettigrew’s concerns were justified; 5,000 people showed up for King’s talk.

In his electrifying speech, King called on behavioral scientists to study mechanisms for decreasing divisiveness and building unity in the Black community, and to inform white America of the “realities of Negro life.” As King said: “White America needs to understand that it is poisoned to its soul by racism.”

In a post-convention letter to SPSSI's members, Pettigrew wrote: "The 5,000 psychologists who attended dramatically testified to their interest and concern in the Civil Rights Movement, as well as to their respect and common belief in Dr. King's dream of brotherhood, by two standing ovations."

From SPSSI's Blog: The Full Text of King's Call to Behavioral Scientists

In honor of Martin Luther King, Jr. Day in 2017, SPSSI reprinted King's 1967 speech on the SPSSI blog, Sound Science, Sound Policy. (You can also find the speech as it was originally printed in Volume 24, Issue 1 of the Journal of Social Issues.) Read King's speech here.

From the Journal of Social Issues: A Special Issue Commemorating King's Call to Behavioral Scientists

In 2018, SPSSI published a special issue of the Journal of Social Issues entitled: "Tell It Like It Is": Commemorating the 50th Anniversary of Martin Luther King Jrs.'s Call to Behavioral Scientists. To read this special issue, which was edited by Andrew L. Stewart and Joseph Sweetman, log into SPSSI's website before navigating over to Wiley's website. The papers in this special issue include: