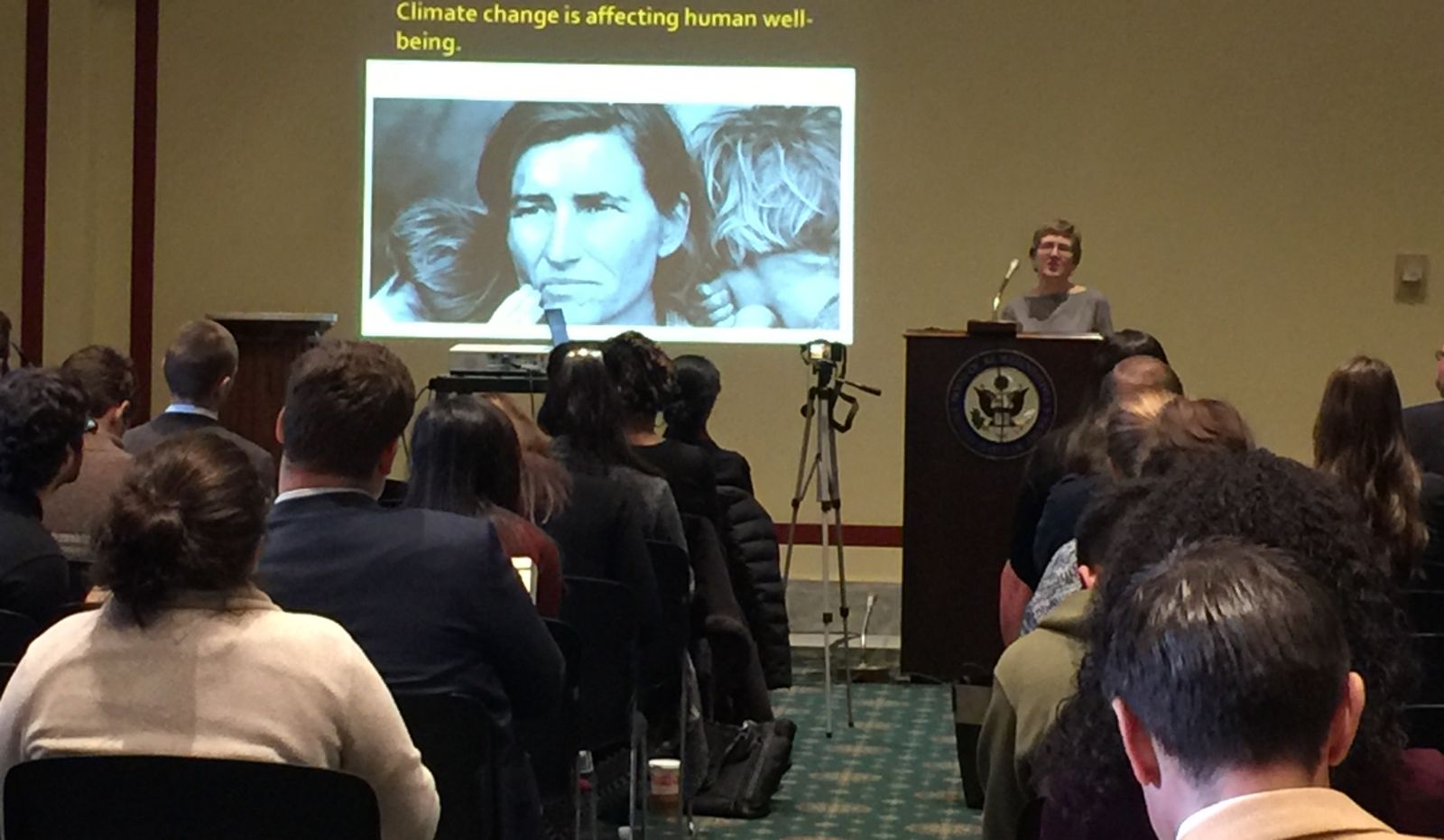 STRENGTHENING HUMAN HEALTH & WELL-BEING IN THE FACE OF CLIMATE CHANGE

On December 12, 2016, Dr. Susan Clayton and Dr. Daniel Dodgen presented at a SPSSI-sponsored Congressional Lunch Seminar on the topic of “Strengthening Human Health and Well-being in the Face of Climate Change: Insights from Psychology.” The seminar was hosted in conjunction with the Honorable Jim McGovern and attended by 75+ congressional staffers and professionals from advocacy, association, and other nonprofit organizations.

During his presentation, Dr. Daniel Dodgen described findings from the 2016 Interagency Special Report on the Impacts of Climate Change on Human Health, of which he was a lead author. The report synthesizes knowledge from across many government agencies on what we know about the physical and mental health effects of climate change, from higher rates of vector-borne diseases to higher rates of depression and domestic violence. He also described findings on populations of concern—populations that are especially vulnerable to the health effects of climate change, including Indigenous Peoples, children, the elderly, some communities of color, and people with disabilities.

The presentation given by Dr. Clayton elaborated on the physical and mental health effects of climate change, drawing special attention to effects at the community level—for example—the impact of community dispersion (e.g., because of floods or fires) to social ties and the effect of extreme temperatures on rates of violence. Her presentation also paid particular attention to building resilience to the effects of climate change at the community level, drawing on lessons from a recently released resource published by SPSSI (Building Resilient Communities in the Face of Climate Change: A Resource for Local Communities) to emphasize that we can and should face climate change not only at the international and national levels, but also at the state and local levels.

Susan Clayton, Ph.D. Dr. Clayton is the Whitmore-Williams Professor of Psychology at The College of Wooster in Ohio. Dr. Clayton is author or editor of a number of books, including Conservation Psychology: Understanding and Promoting Human Care for Nature (with Gene Myers; 2nd edition 2015). Her Ph.D., from Yale University, is in social psychology. Her research focuses on the human relationship with the natural world, how it is socially constructed, and how it can be utilized to promote environmental concern; she is also involved in identifying ways in which individuals and communities are affected by climate change and how they can become more resilient. Dr. Clayton is a past president of the Society for the Psychological Study of Social Issues and the Society for Environmental, Population, and Conservation Psychology. She was a member of the American Psychological Association Task Force on the Interface Between Psychology and Global Climate Change, 2008-09, and lead author of a white paper Beyond Storms and Droughts: the Psychological Impacts of Climate Change, produced by the American Psychological Association. Dr. Clayton is on the editorial boards of the Journal of Environmental Psychology and Social Justice Research, and is a fellow of the American Psychological Association, the Society for Environmental, Population, and Conservation Psychology, and the Society for Personality and Social Psychology. During her tenure as President of SPSSI, Dr. Clayton brought together a group of SPSSI colleagues to create a resource for local communities on how to build resilient communities in the face of climate change. That resource, released in December of 2016, is now available in full (and as a two-page brief). Click here to access both the full resource and the two-page brief.

Daniel Dodgen, Ph.D. Dr. Dodgen directs the Division for At-Risk Individuals, Behavioral Health, and Community Resilience within the U.S. Department of Health and Human Services Office of the Assistant Secretary for Preparedness and Response. His office leads community resilience, coordinates behavioral health aspects of the federal response, and ensures that vulnerable, or “at risk,” individuals (including children, seniors, pregnant women, language minorities, and people with disabilities) are integrated into federal preparedness, response, and recovery activities. His prior position was as the first Emergency Management Coordinator for the Substance Abuse and Mental Health Services Administration, where he addressed mental health, substance abuse, and other psychosocial issues on Department-wide initiatives related to disaster and terrorism response, and coordinated the federal mental health response during Hurricane Katrina. At the invitation of the U.S. Department of State, Dr. Dodgen served as an advisor to the government of Greece and the State Department on preparedness for the 2004 summer Olympics in Athens, Greece. A trained American Red Cross disaster mental health worker, Dr. Dodgen was part of the response to the Los Angeles riots, the Northridge earthquake, the Oklahoma City bombings, and the September 11 Pentagon attack. He is a licensed clinical psychologist in the District of Columbia and has authored many articles and book chapters, presented at national and international conferences, and served on several editorial boards. Dr. Dodgen was also recently selected as a Senior Executive Fellow of the Harvard Kennedy School of Government. Dr. Dodgen is one of the lead authors for the Interagency Special Report on the Impacts of Climate Change on Human Health, which was published in April of 2016.