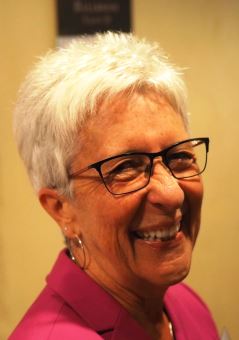 Interesting as it is to compare SPSSI 2006 with SPSSI 2017, the more important part of my personal   memories of my years at SPSSI lies with the people I’ve been privileged to work alongside and to whom I owe my sincerest gratitude. First and foremost, this includes the magnificent staff with whom I’ve shared so much, and without whom I could have accomplished nothing.  Along with our current staff –  Anila Balkissoon who taught me everything I know about SPSSI; Brad Sickels, whose 7th SPSSI anniversary (we call them SPSSI-versaries) we just celebrated here in Albuquerque on Thursday night; and Cyndi Lucas and Sarah Mancoll who are both doing extraordinary jobs to to create opportunities for members to make a bigger difference in the policy arena -- I also want to thank our former staff members – Gabe Twose, Alex Ingrams, and Chris Woodside – and all the Taylor interns and Marshall Fellows who have enriched our thinking and effectiveness in serving you. It has been among my lifetime’s greatest honors, privileges, and daily joys to work with these remarkable and AWESOME people.

Thank you as well to SPSSI’s leadership. The officers and Council members with whom I’ve worked and from whom I’ve learned so much have my sincere appreciation. I am grateful beyond words to all of you who have given me your trust and the opportunities to serve alongside you.

Finally I owe so much gratitude to SPSSI’s members – who are doing the work day in and day out that informs the policies that make living in our dangerous world a more just proposition. SPSSI has come a long way in the last decade. You now stand at the threshold of a new era that will surely dwarf the accomplishments of these las 10 years. I hope your vision remains firm. Thank you all for what you do and for allowing me to share in that endeavor for these last 10 years.